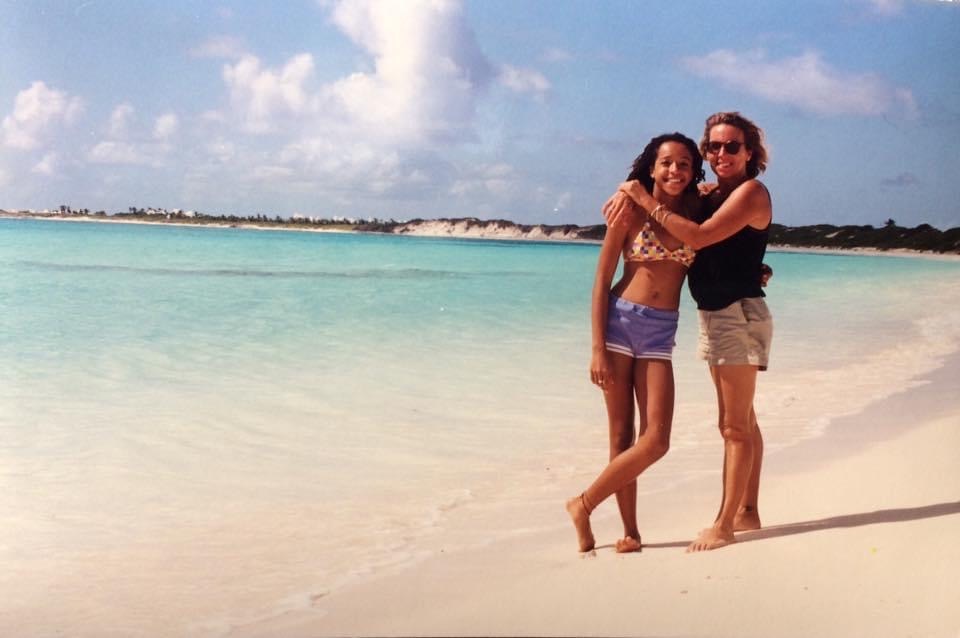 I want to preface this essay by recognising the differing racial dynamics of biracial families. I was raised by my white mother in a single-parent home. I did not have a black parent in the home and, reflecting on this, I realise how that changed my experience. Perhaps it might be different for other biracial children, but for me it was plainly clear that I was a brown girl with curly hair and I was raised largely by my mother and her white friends in the United States of America. I would also like to identify here that I write this from the perspective of a white/black mix. I am aware that there are other ways to be biracial, however, for the sake of this essay, I refer to those with the same mix as mine.

I have recently received questions from some of my white readers about how best to address racism and their white privilege. I spent some time reflecting on what it meant to me 1) for them to ask this and 2) for the common thread that they pulled– my biracial status. It’s not possible for me to think about race relations without recognising that I also possess privilege. There is a veil that biracial children wear which allows them to be cloaked in the middle of the divide. This divide, though, can be wider during times of overt racial unrest. Like now. It’s sometimes difficult to think that white people are evil racists when you were raised by them. It’s hard to imagine black people are lewd criminals when you look like them. All in all, during the Rodney King riots of my 90s youth and again now, I feel the same bipolar magnetism. Which side am I on? Which side can I be on? Which side does society think I should be on?

Part of my writing process involves an extended period of procrastination during which I allow the inspiring thought to ferment in the back of my mind as I go through my regular daily tasks. The ultimate prewriting is not writing, but thinking. This morning, while the idea of privilege and race relations turned itself over in my peripheral thoughts, my daughter was relating to me a conversation she had with one of her friends about the murder of George Floyd. “She told me I need to think about what might have happened before they started filming. I told her that didn’t matter. That he was killed like an animal and it was because he was black. I said ‘my mother and grandmother are white, but I still feel like what happened to him was wrong’.”

What I needed to write burst like air breaking the surface of a pond. My daughter, raised in the West Indies, considered me white even though I still (after 35 years of life) have a hard time deciding exactly what race I am. My boyfriend says sometimes I’m white, sometimes I’m black. My close white friend tells me at times I’m whiter than her. I spent my life in the United States of America ticking “black” in the box on forms. I have café au lait skin with big curls. This chimera of the mind is not unique to me.

I figured out that I would write a list to white parents about what they need to tell their mixed children.

The optics are unavoidable. I feel like I can’t use hashtags like “Melanin Goddess” because of my light skin, yes, but also because I feel like I don’t deserve to be called that. While I purchased a hat for my daughter embroidered with Melanin Poppin’, I would never feel comfortable wearing it myself. Without my white mother by my side, however, I would be seen as just another black girl by any passing white person. Optics. The external category that others put you in as a biracial person can obviously affect how you view yourself, but regardless of that, it’s what you think you are that makes the biggest dent in your identity. You’re just as black as you are white, so yes, when there is a struggle for black people it would include you, even if you don’t present as black on the outside.

Being biracial can be isolating. Everyone around you knows where they stand automatically, but you are conflicted by your internal versus external identity. There are daily struggles you endure. You might not look like either of your parents. People think it’s okay to ask you what you consider yourself more as. Picking sides, picking images. Sometimes it’s easier to just go with what you look like and shove down any other disparities deep in the dark box of unthinking. What I wish someone had told me when I was little was that there were others like me. It isn’t just enough to ensure a mixed child has people of each race in their life. It’s meaningful to see someone with your same dichotomy so you don’t feel alone. Being biracial is a unique experience.

Pictured with my friend Erica’s daughters who are the same mix as me.

One thing that is a struggle for us mixed kids is hair. If you have really curly hair and a white mom, chances are she had you looking a mess when you were small until a well-meaning black woman intervened to give her some curl tips. If you were like me, your mom had Euro-centric hair and you had some curly mop that did not look anything like hers. That was a serious identity issue for me growing up and it took me a long time to appreciate my curls. While white people always asked to touch my hair and my black friends thought my curl pattern to be desirable, I felt like it wasn’t that wavy/straight hair my mother had and therefore just one other way in which I didn’t look like her.

I have heard this word a lot in my lifetime. To term a mixed child “exotic” is a nod toward purposeful breeding and fetishisation. “Exotic” conjures ideas of strange things that are cool, new and not normal. The implication here is that there is a category we expect people to fit into or look like and, as a mixed child, you aren’t in it. Of course, “exotic” is flung around like a compliment (“she looks so exotic”), but all it did for me was further the objectification of my entire existence. Leave the term for birds or foods from different lands. Even a baked potato is exotic somewhere.

The first thing that happens to me when people start discussing race relations is a cloudy feeling of instability. It’s difficult to navigate the fog when you aren’t sure which side of the road you should be on. There is nothing wrong with that. No one should require you to choose one fragment of your identity on which to base your stance. Biracial children should not feel guilty about supporting racial equality or justice, nor should they feel guilty for loving their white parent and family members. It is uncharted territory, of course, but through communication there can be found a path.